Anyone who's seen enough live theatre can tell you: things go wrong all the time. And that's part of the appeal!

Presenting a play or musical is a series of high-wire stunts, no matter how simple the production may seem on the surface. Things can and do go wrong: blown entrances, forgotten lines, technical elements misfiring, stumbles, bumbles and falls – you name it.

The Play That Goes Wrong, opening March 15 at The Rep, is a celebration of all the miscues that can happen in the course of a show, blown up to insane and farcical proportions. So we thought it would be a hoot to ask some of our cast members about the times in which things have actually gone wrong in a live theatre production while they were on stage. And then the all-important follow-up question: how did they cover for the error?

Check out their tales of misfortune and calamity below, and don't forget to secure your tickets for the madness of this side-splitting comedic catastrophe. 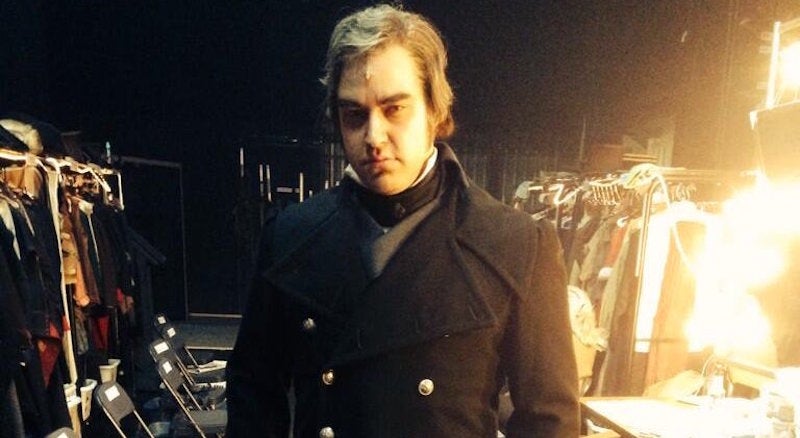 I was reallllllly left hanging onstage once...and I mean that quite literally.

My first show as the unyielding Inspector Javert in the Toronto production of Les Misérables had been going very well. I was nearing my inevitable death, wherein I flung myself off a bridge with the aid of some very cool stage magic and a harness that would help me fly. When all goes well, this harness suspends you in the air for a moment as the rest of the set flies into the wings and then slowly and dramatically pulls you back into a trapdoor in the back wall. The upshot is that it looks as if you are falling and the audience is seeing you from above. It’s quite the effect.

Except on this particular night, it wasn’t.

I flew into the air. The bridge went away. The set went away. Sadly, I did not go away. Thanks to a mechanical error, I remained suspended above the stage in front of 2,000 people. I was beyond the line where the curtain could come down so all those 2,000 people watched and giggled as the biggest, beefiest stagehand they could find had to come and lift me off the flying rig and walk me into the wings. It was embarrassing, ridiculous and in retrospect pretty hilarious.

I played that part many more times in the Broadway company of the show and I never reached that moment without some serious trepidation. Let’s just say that as my Javert perched himself on the bridge preparing for his doom there was very little acting required. 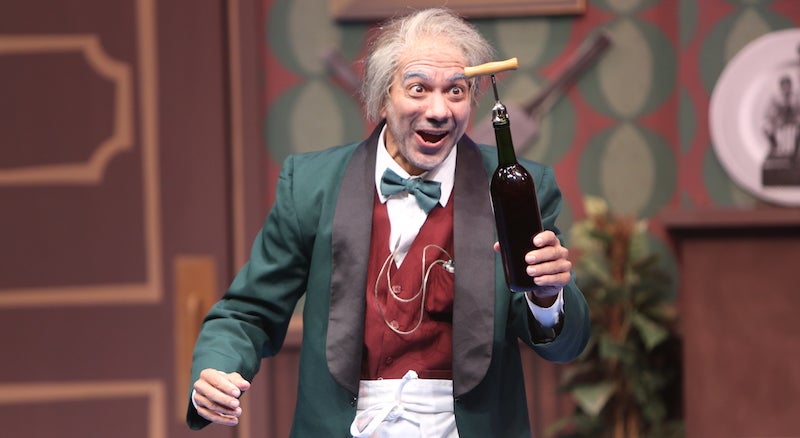 Evan Zes in One Man, Two Guvnors at The Repertory Theatre of St. Louis.

The Accidental Uncorking, as told by Evan Zes

It was opening night here at The Repertory Theatre of St. Louis, September 2014. The show was One Man, Two Guvnors. I was playing the role of Alfie, an 87-year-old waiter who repeatedly falls down the stairs. Needless to say, it was an incredibly physical part. I didn't enter the show until about 45 minutes in, during the big lunch-serving scene.

Alfie was hard of hearing, doddering and weak. There was a bit in the middle of the scene where I was alone on stage and had to open a bottle of wine with a corkscrew. The joke was Alfie was too old and weak to get the cork out of the bottle. So, for about a minute and a half, he tries all these crazy ways to open it – and, of course, hilarity ensues.

I had been working long and hard to perfect this "routine" for over 3 weeks. On opening night the audience was going wild and I couldn't wait to get out there and show off what I'd meticulously worked out with our director, Ed Stern.

When the wine bottle moment finally arrived, I reached for the corkscrew and gave the cork a fake tug like I'd done over a hundred times. I was supposed to keep my wrist loose and bend it to make it look like I was applying torque to the corkscrew. Well, with the adrenaline of opening night, my wrist didn't listen to my brain; it remained stiff and when I yanked on the cork, to my horror the cork slid right out of the bottle! The bit was ruined! I heard Ed Stern in the audience go, "Uh oh!"

I took a breath, looked at the audience and in Alfie's voice said, "That wasn't supposed to happen. I'll start over." So, I put the cork back in the bottle and started the routine.

(Watch Evan correctly execute the routine in the clip below): 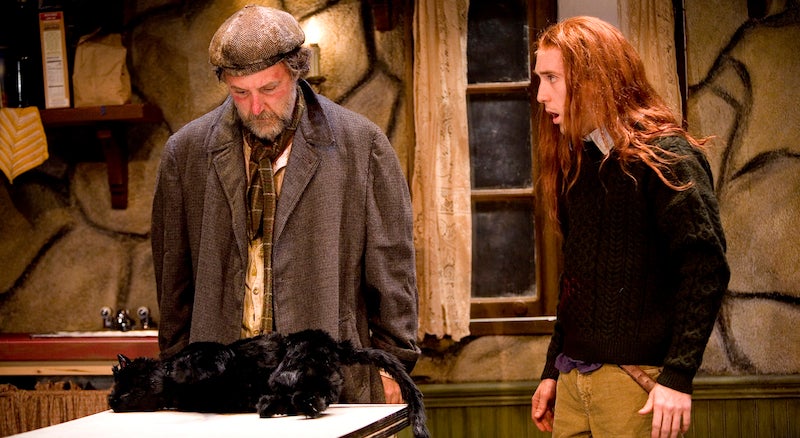 Matthew McGloin, at right, in The Lieutenant of Inishmore at Signature Theatre.

The Bloody Dress, as told by Matthew McGloin

I did a production of the dark comedy The Lieutenant of Inishmore, which has quite a bit of stage blood in it. They were still figuring out how to make the exploding blood packets work during previews, and unfortunately they had been placed a bit too close to the audience. During the climax of the show when the lead antagonist is shot, the blood squibs burst and sent gobs of red liquid onto a woman sitting in the first row. That moment was staged to be one of complete silence and stillness, but instead we heard a loud gasp, followed by “ALL OVER MY WHITE LINEN DRESS! …. THANKS A LOT, GUYS.” From what I understand, the theater kindly paid the dry cleaning bill. 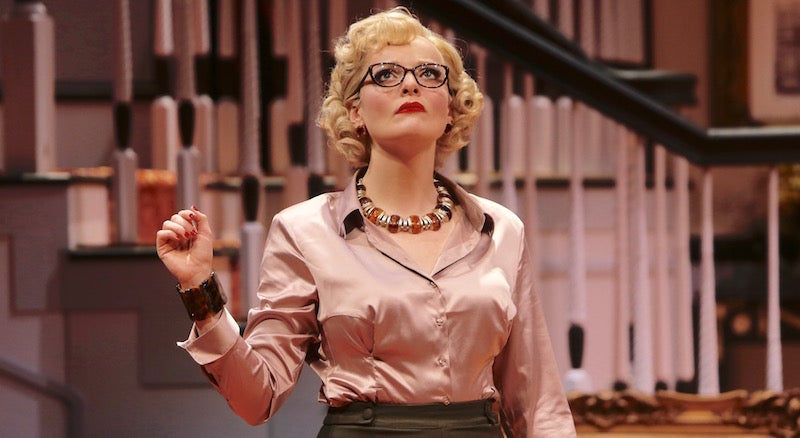 Ruth Pferdehirt in Born Yesterday at The Repertory Theatre of St. Louis.

The Wardrobe Malfunction, as told by Ruth Pferdehirt

Maybe this is a spoiler, but The Play That Goes Wrong isn’t the first time I’ve had a wardrobe malfunction on stage. I was doing a production of Return to The Forbidden Planet my freshman year of high school, and I had a big reveal in a Marilyn Monroe- inspired white dress. I was dancing away, went down for a dip and came up with less top than I started with. Let’s just say it’s a big design flaw to have a halter dress closed on the neck with Velcro. And that’s why you always make friends with costume designers. 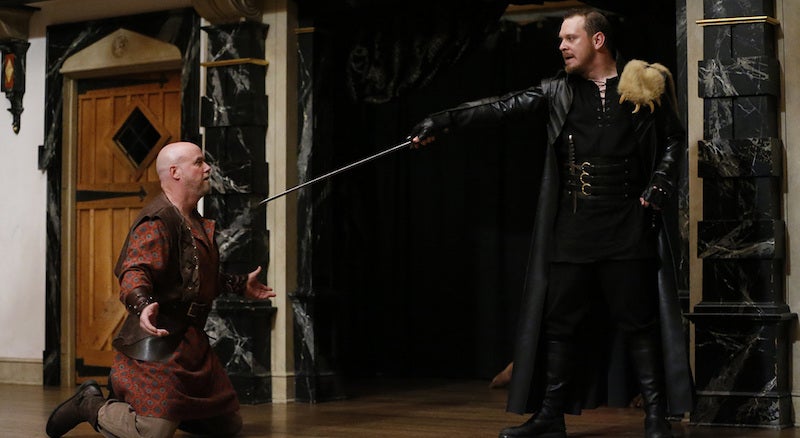 Swordfights and Skittles, as told by Benjamin Curns

I was playing Mercutio during a student matinee performance of Romeo & Juliet. The big sword fight scene with Tybalt was happening just after an intermission and this meant that all of the students were enjoying their sodas and candies when the play resumed. The playhouse was a thrust and there were stools directly onstage where some of the kids were sitting.

In previous performances, after getting the best of Tybalt in a phrase of the fight, I would frequently high-five members of our onstage audience and this always went without issue.

The audience erupts. I'm standing now with a handful of Skittles and a sword.

I figure I can't give them back; it would negate this weird special thing that just happened. I can't eat them or drop them, I still have more than half the fight left to do. I'm frozen.

That is until an industrious castmate who was playing Sampson (appearing in that scene as Tybalt's second) gingerly walked over to me. With one hand, he tilted my handful of Skittles into his other hand and then promptly shoved them all in this mouth! As he backed up, he gave me a gesture as if to say "and now you can get back to fighting".

Struggling to keep even a hint of a straight face, I got back into en garde, looked at the actor playing Tybalt and said, "Come sir."

What wound up being unexpectedly great about this comedy in the midst of swordfight was that the audience was having so much fun experiencing this unique event that they seemed to forget that Mercutio LOSES! When I was fatally stabbed, the surprise in the audience was palpable!

So there you have it: Swordfights and Skittles. A winning combination!