Much like his Born Yesterday character Cousin Eddie, Randy Donaldson is a man who always has a plan.

Not only is he an accomplished on-stage performer, Donaldson has forged a second career for himself as a Broadway producer. While he's appearing in our production of Garson Kanin's classic comedy, Donaldson is also casting a Broadway production of a play called Mr. Rickey Calls a Meeting, which is based on Jackie Robinson's historic 1947 call-up to the major leagues.

Donaldson is positively giddy about the show's potential.

"So when you hear about it, everyone come see it. It's really, really, really great," Donaldson says in a bubbly fit of enthusiasm, pounding the table with each "really."

In the meantime, we spoke with Donaldson about his current role in Born Yesterday, how he got into producing and the last show he appeared in at The Rep – which was more than 25 years ago.

1.) Introduce us to Cousin Eddie.

He just picks everything up. He knows what Harry wants before he even asks. (Harry) turns around, he puts his hand out and there’s a drink there for him. I know exactly how he wants everything. I know where he wants it; I know how he wants it. Without him knowing it, I could probably run this operation. (Laughs) 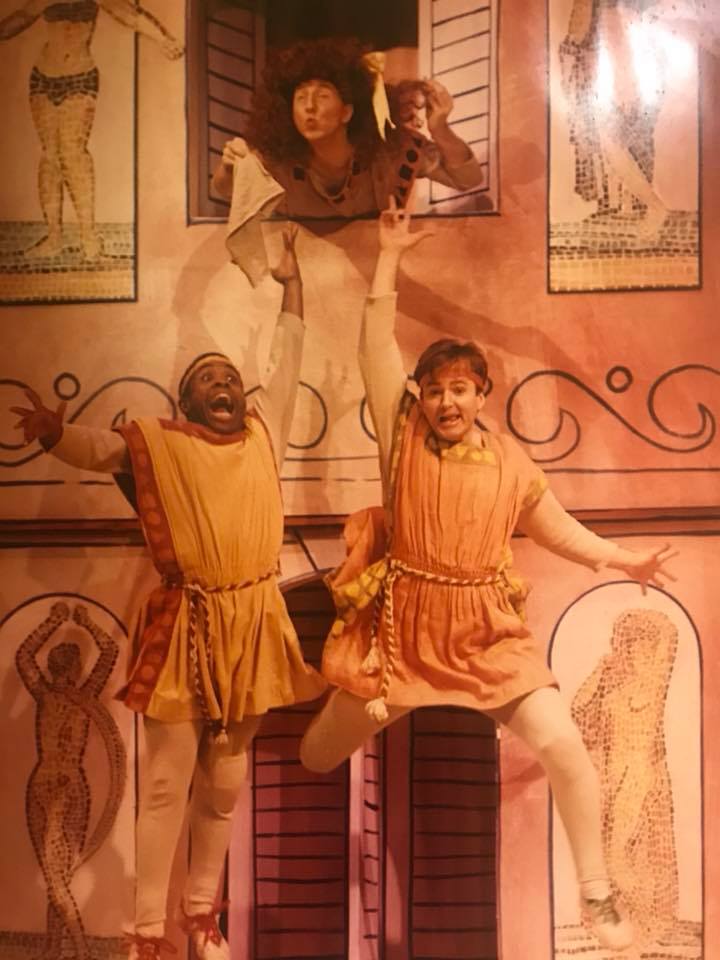 2.) The last time you joined us here at The Rep was A Funny Thing Happened on the Way to the Forum in 1992. What do you remember about that experience?

What I remember about that experience is that we had a great cast. We had a lot of fun for three weeks of rehearsal. We laughed for six-and-a-half hours every single day.

What I would say is, “You know what you might want to try? Spend a year in L.A.” Today I would give myself that advice. My career, I have not one ounce of regret. I’ve had the greatest career ever. But I think that I would have liked to see what it would have been like to try some sitcoms, some television, because I’m trying it now and it’s not as easy when you’re a middle-aged man. (Laughs)

4.) How did you get into producing?

I was on the Lion King tour for three years, and it was great. I had the greatest time doing the show. I didn’t want for anything; I was making more money than I’ve ever made. But I needed roots. I needed to set down some roots.

And I got off the Lion King tour and said, “OK, I am not going to go anywhere anytime in the near future because I’m tired of feeling like a nomad.”

So I was talking to a friend of mine who was a Broadway producer. He would always talk to me about what he was doing and it always fascinated me.

He said, “There’s a producer seminar. It’s a three-day seminar. You should take it.”

So I took this three-day seminar, and during all the panels that were going on, they would ask questions. And I would answer those questions. Then I would sit back and think, “Wow, I guess in the 20-something years I’ve been in the business I’ve learned a little something.”

It just kind of blossomed into this desire. So one thing led to another. This producer said to me, “I’m producing a Broadway show. Do you want to be a producer?”

He said, “I want you to raise money for me.”

I’m like, “Well let me see what I can do.” And it turns out that I was able to raise money for that show. It was The Pee-Wee Herman Show.

5.) What is the skill set that a great producer needs? What does it take to the job really well?

Surrounding yourself with really smart people and getting out of their way.