Five Questions with the real-life married couple of CONSTELLATIONS

On the first day of rehearsals for Constellations, director Steven Woolf sat down with his cast: the real-life married couple of Ellen Adair (Marianne) and Eric Gilde (Roland). They were about to begin work on a complex script whose scenes encompassed multiple alternate realities.

"You must have talked about this play a lot," Woolf said.

"Actually... we never talked about it."

After eight years and multiple shows together, Adair and Gilde just have that level of artistic trust in one another. Even without lengthy script discussions, they showed up to rehearsal on the same page, and never looked back.

We sat down with Adair and Gilde to discuss the challenges of the show, their working marriage and how it's helped them through Constellations' many twists and turns.

1.) So you sit down with a script that features multiple parallel universes and multiple versions of your characters. As actors, how do you begin the process of untying that knot?

Ellen Adair: The first time I read the play was when we read it aloud together. So I felt like I immediately understood a lot of things about the play. And I think that’s because plays are constructed to be heard rather than read. If you’re just reading something out loud, you’re going to learn so much more about it very quickly.

I feel like so much of an actor's enjoyable work on this script is figuring out what’s going on in each of the universes and what makes this universe different from the last one.

2.) A number of scenes feature almost identical dialogue repeated across different universes. How did you try to make each of those variations distinct?

Adair: In rehearsal, we decided that the most fun thing is to take it as much as possible in two different directions, even though the text is relatively similar.

There's one section of the play where the text is exactly the same three times. It's a classic actor thing: if a playwright gives you the same thing three times, it's an invitation to say it differently each time.

Eric Gilde: Because you're constantly asking — especially with a play like this that doesn't have much of anything in the way of stage directions — why is this repeated three times? Why are these words substituted but not these?

Sometimes, the play itself and the way that the conversation is structured gives you some pretty solid clues as to what makes this one different from another. In others, where it’s not much different at all, it became more about the two of us and Steve together thinking about the most interesting progression or arc.

Above: Adair and Gilde rehearse a pivotal elbow-licking scene with director Steven Woolf.

Gilde: It’s been fun to play with a dynamic that’s always shifting with the same person. With so many worlds in this play, it’s fun for just the two of us to have this experience of, "I’m in love, now I’m jealous, I have the upper hand, now I don’t have the upper hand." All of those fun things pinging around just within seconds of each other.

4.) What experience do the two of you have performing together?

Gilde: This is the fourth show we've acted in together. It's something that doesn’t come along too often opportunity-wise. We're always very grateful when we get the chance to work together, because we like working together.

Adair: Not all couples do. Our first show was also a two-person play, so we were aware that maybe we were jumping in on the deep end of the pool. But then it was wonderful, so we were happy to be in the pool. One of those shows, it should also be said, was our own fault. We have a little theatre company in New York, and one of those shows was a show that we were in together with our theatre company.

Gilde: Which we also directed and produced.

5.) Was this show more challenging to do, since it walks through a relationship from start to finish and features some real emotional gut-punches along the way?

Gilde: Personally, it can make the journey harder in some ways, but as an actor, it makes part of it easier. It’s easier for me to have an emotional response to my real-life wife, given that we've been together eight years.

It felt like such a leg up to go into a play like this with someone who you already know, love and have worked with before. All these levels of trust, all this shorthand.

Adair: As much as we enjoyed working with each other before, I feel like I’ve still had this epiphany when we were doing (Constellations). As compatible as we are as human beings — and we’re very, very compatible — we’re even more compatible as artists. We really have very similar values. Not identical, but very similar in terms of what makes good storytelling and what’s important.

It was a really great experience. We’ve always had a good time working together, but I think this has been the most fun of any of them. 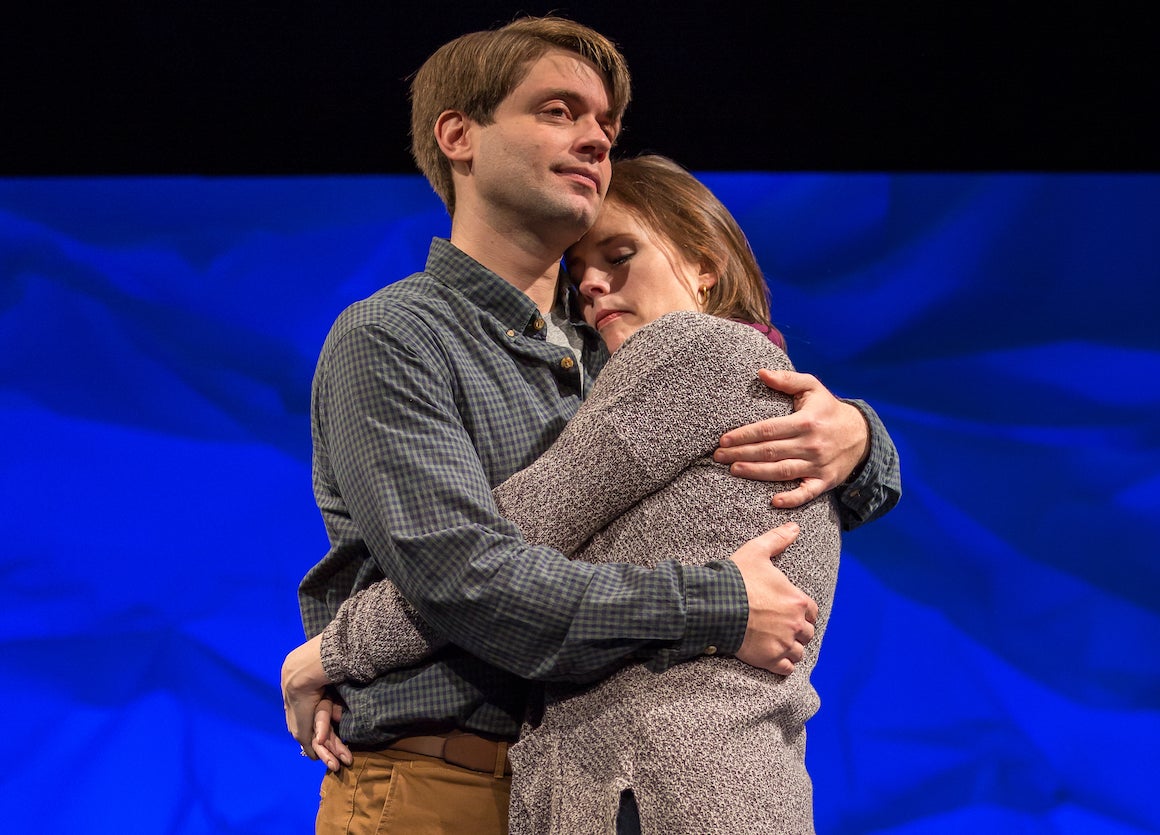